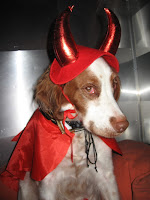 Santa. Satan. Ever notice how similar these two words are? Felicia was determined to get to the bottom of this seeming “coincidence.” A spokesperson at Santa’s corporate headquarters said they had “no comment” and calls to Santa’s home in the North Pole went unreturned. However, Felicia was able to corner Satan at the bar when he dropped by last week for a dirty martini, which turned into four dirty martinis, causing Satan to have, shall we say, a loose (forked) tongue. Satan said that back in their youth, he and Santa, who was known then simply as “Nick,” were pals. They both had their share of pranks and harmless fun, with Satan whooping it up in bars and chasing women, while Nick liked to dress up as a clown in a red suit and act goofy to entertain people. But as Satan became more popular and made more friends, Nick became jealous, set his sights on young children as easy targets, and changed his name to Santa, hoping to make himself more likeable. “Frankly,” said Satan bitterly, “Santa is really creepy. And it’s all a myth. He doesn’t even deliver gifts to children, the parents do. And he gets all the credit for their work.” Satan fingered the olives at the bottom of his empty glass and sighed, “I don’t see why I get such a bad rap nowadays.” Of course Felicia wonders if Satan’s version of the name story is true. But Felicia is not going to be the one to challenge Satan because he always leaves great tips.
Posted by Who is Felicia? at 11:58 AM

Email ThisBlogThis!Share to TwitterShare to FacebookShare to Pinterest
Labels: Holidays

i am never there when satan is. just saying.....