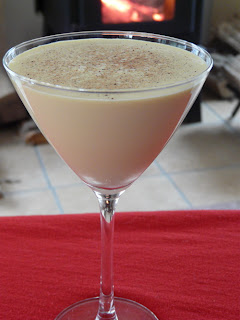 When Felicia was a wee lass, her grandfather would stop by the house about a week before Christmas and announce, “Let’s all go over to Uncle Andrew’s to see the tree” which was code for “Let’s all go over to Uncle Andrew’s to get drunk.” Grandpap and Uncle Andrew’s spirit of choice was whiskey, sipped out of small mismatched glasses at first, and later swigged directly out of the bottle(s). And while Felicia loves a fine small-batch bourbon, when entertaining this holiday season she is focusing on the delights of eggnog. First, forget the homemade eggnog. Do you think your friends really want to drink something you made in your own kitchen with slimy raw eggs? Be a better hostess and buy a half gallon of eggnog at the grocery store. Now about the liquor...let Felicia enlighten you with the fact that rum in eggnog is so last century. Plus Felicia cannot consume rum, thanks to an incident many years ago when she was a doe-eyed 14-year-old girl. Why not make a hip holiday drink this year like the Eggnog Latte Martini? Felicia recommends adding both 3/4 ounce of Stoli vanilla vodka to your glass of eggnog and and 3/4 ounce of Kahlua coffee liquor. Shake it up with some ice and strain it into a martini glass. A sprinkle of nutmeg on top makes it festive. Did you invite vegan friends to your party, or lactose intolerant friends who will be tempted to try your trendy Eggnog Latte Martini and then pass gas in your house? Try a soy nog substitution for them. And if you don’t have Stoli vanilla or Kahlua in the house, you can always fall back on rum, brandy or bourbon, and mix it with the eggnog into your morning coffee. Now let’s all go over to Felicia’s to see the tree…

Shake all ingredients with ice and strain into a martini glass. Garnish with nutmeg.
Posted by Who is Felicia? at 12:59 PM

This sounds amazingly delicious. I'm going to make it for my holiday party this Saturday. Can't wait!