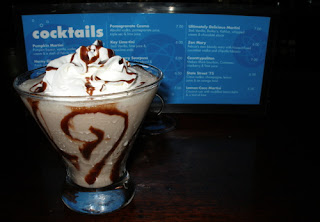 A girl cannot live on alcohol alone. She needs chocolate, too. The Ultimately Delicious Martini can satisfy both urges at once. It is high in calories as well, so if you have stopped eating solid foods to devote more space in your body to cocktails, or if you have chronic wasting disease, this drink is definitely for you. For the rest of us, it’s dessert in a glass; a sweet, chocolately and creamy after-dinner drink.

Shake all ingredients with ice. Strain into a chilled martini glass that you have decorated with chocolate syrup. Garnish with whipped cream and a fancy drizzle of chocolate sauce.

Adapted from a recipe by Teresa Zawacki.
Posted by Who is Felicia? at 1:00 PM 1 comment:

She’s a very dirty girl…The kind you don’t bring home to mother…But you do bring her to Felicia’s, where there is a martini waiting just for her. Not much needs to be said about the classic Dirty Girl Martini. The saltiness if perfect on a hot day to help replenish your electrolytes, and the olives can satisfy your urge for a full meal. This martini can be your light lunch, your afternoon snack, your classy dinner, or your late night bite. To meet your daily protein requirements, try stuffing the olives with feta cheese or a Slim Jim. Are you ready for the Dirty Girl? Or are you all talk? Hmmm? Felicia is waiting.

Shake vodka and olive juice with ice. Strain into a chilled glass and garnish with olives.
Posted by Who is Felicia? at 1:56 PM No comments:

Email ThisBlogThis!Share to TwitterShare to FacebookShare to Pinterest
Labels: vodka

One of Felicia’s inspired frequent flyers wrote in with her own, low-budget recipe for a relaxation cocktail:

“Since I can't afford NyQuil or Vicodin (or a hot tub), I usually end up getting in the shower with a bottle of mouthwash and 6-10 tylonol PM. It works kinda the same except I don't usually make it to my bed in time and wake up to my roommate slapping me around a few hours later.”
Posted by Who is Felicia? at 1:54 PM No comments: 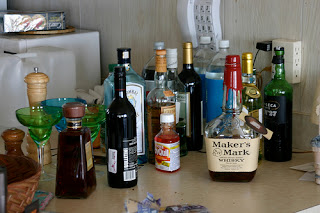 What is Felicia drinking these days? It depends on the mood, Sweet Cheeks, it depends on the mood. Baking pie? Gran Marnier or a nice port wine. Rough day? Bourbon, neat. No food since breakfast? A dirty martini, because it tastes like a meal. Chilly? Loco Hot Cocoa or hot mulled cider. On a date? A full-bodied, spicy red wine. And here’s Felicia’s favorite nip when there’s nothing else in the house to drink:

Wash Vicodin down with Nyquil. Soak in hot tub for 30 minutes. Fall into bed and have sweet dreams til morning.
Posted by Who is Felicia? at 9:24 PM 1 comment: 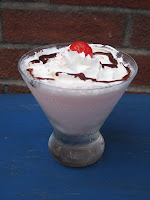 In the summer of 2007, a newspaper article battle began between Ithaca, NY and Two Rivers, Wisconsin as to which city can claim to be the home of the first ice cream sundae, created in the late 1800’s. Being from Ithaca, Felicia is of course biased. Felicia took advantage of the debate and introduced the Ithaca-is-the-home-of-the-Sundae Martini. Though it tastes like an ice cream sundae in a glass, incredibly, the Sundae Martini contains no ice cream. What, you think Felicia wants to get fat? Who needs ice cream when one can have a martini?

Muddle four of the maraschino cherries. Add Stoli vanilla, Godiva and ice. Shake and strain into a chilled martini glass. Top with whipped cream, chocolate sauce and the remaining cherry.
Posted by Who is Felicia? at 2:15 PM No comments:

What can brown do for you? Bourbon can help men sprout hair on their chests and give women the courage to use a chainsaw. It can toughen you up and start a fire in your soul. If you don’t want to give up your foo-foo drinks, the Countrypolitan just might be the cocktail for you. The Countrypolitan, a creative take on the standard Cosmopolitan, can act as a tame introduction to bourbon for the weak, add pizzazz to that same old whiskey that you’ve been drinking on the rocks every night for years, or dress up your favorite spirit to impress that hot babe you just invited over to your shabby pad. The Countrypolitan gives you the best of both worlds. The city mouse and the country mouse collide with cocktails in their hands. The Wild Wild West meets Sex in the City. A timber wolf and a poodle make sweet love to each other.

Shake with ice and strain into a chilled martini glass. Garnish with a lime wheel.
Posted by Who is Felicia? at 1:25 PM No comments:

Email ThisBlogThis!Share to TwitterShare to FacebookShare to Pinterest
Labels: bourbon 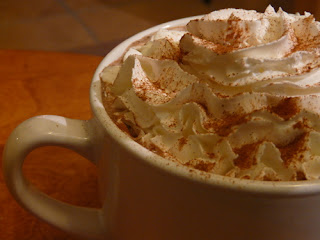 It’s chilly and you are cranky. Winter is coming, and you are singing the blues. Whether it be cold toes, snow shoveling, stressful holidays with your family, inflatable snow globes or just PMS that has you feeling down, Felicia has the drink for you: Loco Hot Cocoa. Yes, Felicia has finally found the perfect combination of liquors and spices to sooth your nerves and melt you right into the couch. Hibernation never looked so good.

Heat milk, hot chocolate, cinnamon and cayenne. Pour into mug and add Knob and Cointreau. Top with whipped cream and a dusting of cinnamon.
Posted by Who is Felicia? at 4:51 PM 1 comment:

Over the past three years, Felicia was inundated with requests from bartenders all over the country who wanted to know her secret to making an amazing Pumpkin Martini. Truth be told, they wanted to know where the heck she got her pumpkin liqueur since Bols had stopped making it. Well, kids, Felicia is a thrifty gal and she bought five cases of the stuff when she heard that it would be unavailable. This fall, just as Felicia’s stock was becoming dangerously low - chorus of angels - Bols Pumpkin Smash is back AND Hiram Walker is making its own Pumpkin Spice liqueur. Will Felicia divulge her highly coveted Pumpkin Martini recipe? Why the heck not. You’ll be able to read it in her soon-to-be-published recipe book anyway. Those of you who are skeptical about trying a Pumpkin Martini, Felicia reassures you that this martini bears a strong resemblance to pumpkin pie. Why, it’s dessert in a glass!

1.5 ounces of pumpkin liqueur
½ ounce of Stoli vanilla vodka
1 ounce of half and half (or soy milk for you vegan freaks)
dash of pumpkin pie spice (Felicia uses her own special blend)

Shake with ice, strain into a martini glass. Top with whipped cream and another sprinkle of pumpkin pie spice.
Posted by Who is Felicia? at 4:49 PM No comments: