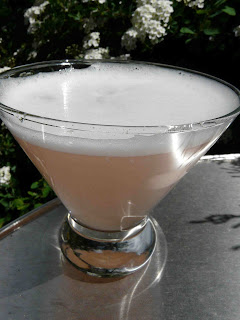 Editor's note: Click here for the 2009 updated Rhubarb Martini recipe! It just keeps getting better, with more puckered lips and squeaky teeth. Now back to the original post:

Apologies from Felicia for not blogging sooner. She has been busy looking for fresh cocktail ingredients at the Farmers’ Market. Because rhubarb is only available a few weeks out of every year, Felicia is always excited to find fresh-picked rhubarb at the market and roadside produce stands. Many people like rhubarb and strawberries together, but Felicia prefers to enjoy the complex flavor of rhubarb without its berry friend, whether in a pie, a crisp or a martini.

Felicia’s Rhubarb Martini recipe is a bit labor intensive because you will need to turn rhubarb into rhubarb juice using the following method: Simmer 1 cup of thinly sliced rhubarb with 1 cup of water, keeping the lid on the pot, until the consistency is totally mushy (about 30 minutes). Strain the juice from the mixture using a fine mesh sieve. Discard rhubarb (or eat it later with some vanilla ice cream). Add sugar to the juice, starting with one tablespoon and adding more to taste. This sweetened rhubarb juice will be combined with vodka to make the Rhubarb Martini.

Too much work for you? For a limited time, the Rhubarb Martini is available at Felicia’s Atomic Lounge.

Shake all ingredients with ice. Strain into chilled martini glass.
Posted by Who is Felicia? at 10:39 AM No comments: