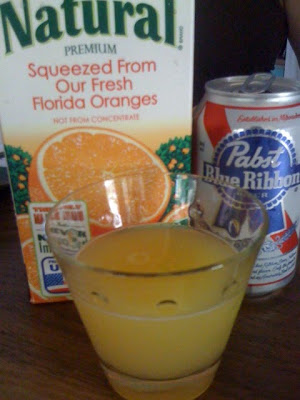 Maybe I'm too lazy, or maybe I'm too busy, but whatever the reason, I simply haven't jumped on the beer cocktail bandwagon yet. Leah's definitely had her hands full with incoming produce from our awesome farmer: scapes, black caps, and soon, plums.
Those black cap (black raspberry) cocktails are CRACK. We've gotten a lot of people completely addicted to them, and now they want, want, want and we sell, sell, sell. Stop by the Lounge this week for a fix.
But back to beer. Typically, I'm a purist. I like my gin on the rocks with no mixer, my wine in a glass with no spritzer, and my whiskey swigged straight out of the bottle. Beer is no exception. So when Frederic at Cocktail Virgin (Slut) announced that this month's Mixology Monday theme is beer cocktails, I knew I had some work to do.
Or not. Because the day before I read Frederic's post, I actually made a beer cocktail. It wasn't on purpose. I was just too lazy, I mean, busy, to go out and buy champagne when I had a craving for a mimosa. I opened the fridge, and next to the orange juice was a can of PBR, beckoning me to take a risk.
Ice cold PBR and orange juice. Weird, or genius? It worked for me. The recipe is complicated. so pay attention:
PBR Mimosa, aka The Lazy Girl
PBR
orange juice
champagne flute
Open the can of PBR. Take a swig from the can. Fill your champagne flute halfway with PBR. Chug some more beer from the can. Add orange juice to the PBR in a champagne flute, take a sip, and proclaim loudly, "This is the shit! It tastes just like a mimosa. Who needs champagne?"