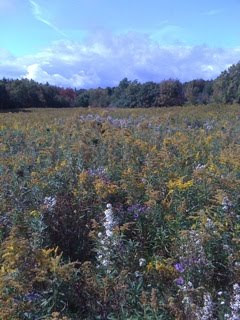 Once a year, Leah and I jump off the grid and land in the middle of nowhere in the Adirondacks for a week. The fall is a quiet time up in them there hills, with no screaming mosquitos or buzzing children to bother us.

Back at the cabin, we drank a lot of Heron Hill Chardonnay, plus one of Leah's birthday gifts from bartender Melissa, Westmalle Dubbel Belgian Trappist Ale, which paired delightfully with sourdough bread and cheddar cheese.

Ironically, a hike in the Finger Lakes National Forest yesterday brought us into close proximity with a moaning black bear. OK, we didn't see the bear directly and I'm not sure the park ranger believed us, but the only other thing that could have been making that hair-raising noise is a zombie, and I doubt a zombie would want to hang out in the forest since human brains are scarce. What, you don't believe me either? Go to this site on bears and scroll to the last sound clip. If what we heard wasn't a bear, then from what I can tell from my extensive (five minutes of) web research, Bigfoot is hiding out in the Hector's National Forest. You heard it here first.

Speaking of birthdays, Felicia Atomic Lounge turns 5 years old tomorrow. What is that in human years? 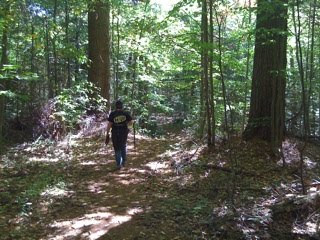 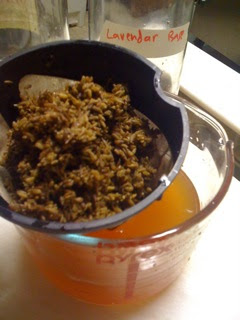 Leah delved into making her own bitters earlier this summer. Her orange bitters are now available at the Lounge, most often added to Old Fashioneds and Manhattans. Her lavender bitters totally kick butt, and they made it immediately - and successfully - into a parade of delicious gin and tonics. Usually I don't like lavender in my beverages because I feel like I'm drinking massage oil or lotion, but the lavender gin and tonic is divine to imbibe, as is Felicia's non-bitter lavender lemonade. (Regarding a chocolate bar with lavender in it, I would prefer it if you melted it and rubbed it all over my back, thank you.)

The coffee bitters smell like fresh roasted coffee, but they definitely are not for the faint of heart. When I tasted them, I wanted to add sugar, cream and Monin toffee nut syrup. So far, we haven't gotten past the urge to turn the coffee bitters into a latte.

Anyone have suggestions for what kind of drink to make with coffee bitters? 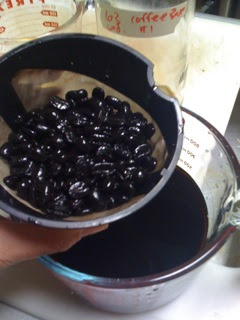 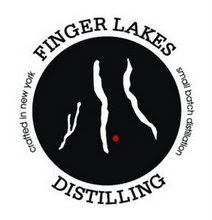 First - get it on you calendar - Felicia's is hosting a tasting of Finger Lakes Distilling's products at the Lounge this Thursday, September 10, 2009 from 7pm-8:30pm. Prez Brian McKenzie will be there to pour the goods, and you get to meet the Master Distiller, Thomas McKenzie, who is an entertaining, story-filled deep south Alabaman with the accent to prove it.

Here's what we're carrying at Felicia's and some of our thoughts about tasting and mixing with Finger Lakes Distilling liquors: 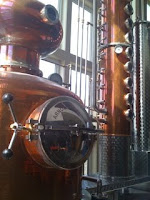 Vintner's Vodka - The cool thing about this vodka is that it's made from local grapes. What you'll notice when you taste it is that it is fruity and floral, almost but not quite sweet, making it great for a martini with a twist of lemon or if you're a wussy, you might like it with cranberry juice. Olive juice with this vodka is a no-no. 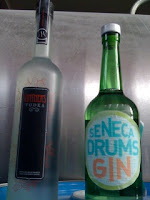 Seneca Drums Gin - The gin has been a big seller at the Lounge. Also made from grapes, it has a bunch of subtle herbal notes that shine through any mixer. We like it with tonic, lavender lemonade, in a mojito (in place of the rum, silly, not in addition to it) or as a stand-alone sipper. 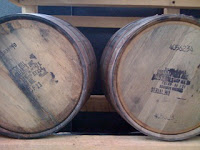 Glen Thunder Corn Whiskey - Drink it as a shot. Try it in an old fashioned. Or be like Felicia and substitute it for cachaca in a caipirinha. Earthy and potent, this hooch tastes like Hector would taste if a backwoods town could turn into a liquor. 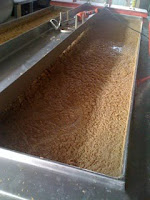 Vintner's Wild Berry Vodka - Tastes like exactly what it is: vodka mashed up with local blueberries, strawberries and raspberries. Also rocks out with lavender lemonade, plus we like it in a cosmopolitan. 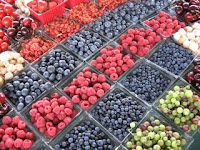 Felicia's is also carrying Finger Lakes Distilling's liqueurs: blueberry, raspberry, cassis and maplejack. My personal favorite, berry whore that I am, is the raspberry. I could drink it straight. 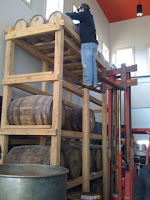 Hector has long been known as the land of making hooch, and this time it's legal. Finger Lakes Distilling has gotten some great press, not only because it's unique to have liquor on the wine trail, but because they got some good hooch going on over there. Hope to see you Thursday, and if you can't make it, you'll just have to visit the distillery yourself. 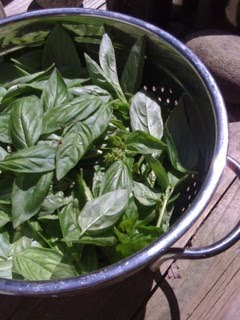 I can't believe that it went to down to 43 degrees on Monday night. At midnight, when the thermometer hit 45 degrees, I snuck out to the garden with a lantern to harvest some basil for fear that there would be damage.

The good news is that I needed to harvest some anyway, and the even better news is that the morning revealed that the damage was minimal. Literally only a couple of leaves turned brown.

Since the basil only started producing prolifically a few weeks ago due to our cold, wet summer, I'm glad we're going to have a few more weeks of life with it.

I wonder when it's going to frost this year? Usually we have a hard frost the third week of September, but last year it was well into October before there was any significant frost. By then, we were so tired of mojitos that it was good to see the mint go.

OK, big fat LIE. The mint, hardy as ever, lived until January. But we were damn tired of muddling so we took mojitos off the menu.

For now, though, while it's still kinda sorta summer, feel free to pig out on mojitos and basil-infused vodka. 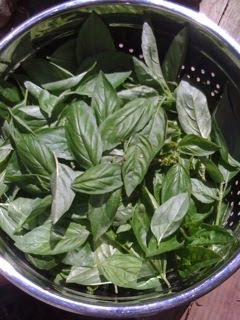 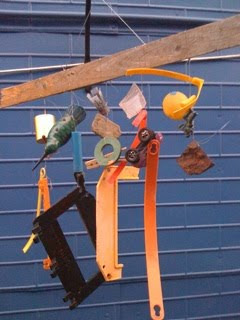 Felicia's Atomic Lounge's September AlleyArt show is Sustainable Mobiles by Laura Robert. The opening reception (featuring Felicia bean burgers for one night only!) is Tuesday, September 1 from 5:30pm-7pm. The show will be up through the end of September.

Laura Robert was born in 1953, the oldest of nine children in an Air Force family. Her father retired when she was fifteen and the family moved to New Orleans. Laura has lived in or near Ithaca for almost 30 years.

Laura describes her inspiration, "I love the deep green of the trees, and the water which is heard before it is seen. My art is largely articulated by the materials at hand, and the environment in which it is created. I like to make the objects crowded so that they make music on their own."

Laura started making mobiles when a friend visited her on the Cape in the early 90's, creating the first one with dental floss. The Felicia show was created in the first three weeks of August 2009 while Laura was vacationing on Cape Cod.

"The campground 'pick-up' lady saves interesting stuff for me," says Laura. "Everything else is found on the beach, or just plain looking down."

Laura's mobiles are available for purchase and each will be awarded to the highest bidder. Sale proceeds will go to the Advocacy Center. The mobiles are numbered on the back; look for the bidding container in Felicia's Alley.

Felicia is currently accepting submissions for fall and spring AlleyArt. Guidelines can be read here. 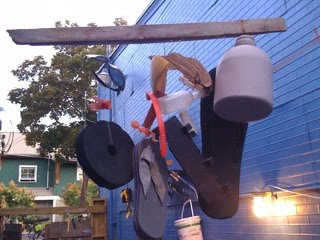