Below is the Felicia Table of Elements (or is it the Periodic Table of Felicia?) as seen on display at the Corning Museum of Glass, in Corning, NY.  The science lesson is we are all essential elements, and when mixed properly, we become the perfect cocktail that is known as Felicia. 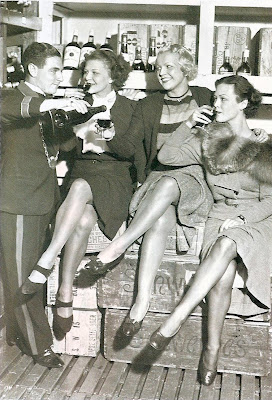 Since the 1930’s, the site of Felicia’s Atomic Lounge has been a bar. Though we looked up its history once, damned if I can remember what it was called back then. Chalk my bad memory up to aging and excessive gin consumption. Not sure anyone is still alive who can tell us about the early years of this saloon, especially given the fact that the West End was a rowdy, rough-and-tumble, what-happens-in-the-bar-stays-in-the-bar kind of neighborhood for many decades.

I love to say that history doesn’t matter, and that some cocktails are best forgotten (like most of my ex-boyfriends). But then Leah got her hands on a copy of The Savoy Cocktail Book (1930), ironically first published during Prohibition. The guide is filled with cocktails that rely on only a few basic liquors: Gin. Whiskey. Vermouth. Kirsch. Absinthe. Sherry. Lillet. Brandy. Even my old frenemy, Fernet Branca. And so our liquid exploration of cocktail history has begun.

We decided to throw a Classic Cocktail party - maybe a series of them - the first being April 17, from 7pm-10pm. The bartenders will be mixing five or six different cocktails for you to sample. If one martini usually knocks you on your ass (like me), never fear: These cocktails will be served in small martini glasses that are about half the size of today’s giant bowls of chilled alcohol, because back in the early 1900’s, drinks were simpler AND smaller. Even the martinis on Mad Men reflect a reasonable restraint, at least in the mixing, though not in the consumption. (How do you think people managed a ‘three martini lunch?’) But, in Leah’s words, “Nowadays we’re a bunch of spoiled kids consuming ridiculous, decadent overcomplicated cocktails filled with corn syrup and food coloring.”

We’ve come a long way, baby, but it ain’t all good. Let’s pay homage to the past. At the Cocktail Classic, expect to try some creative Felicia interpretations of cocktails that have been around for 100+ years, like the Corpse Reviver, an early hair-of-the-dog hangover “remedy.”

Drink your tonic, Carrie Nation. We’re coming for you, Felicia-style.

The Cocktail Classic will be held at Felicia’s Atomic Lounge from 7pm-10pm on April 17, 2012. Also stay tuned for details on the upcoming release party for our barrel-aged cocktails. 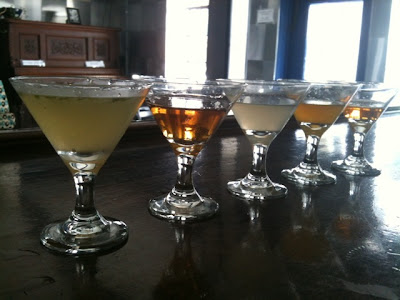