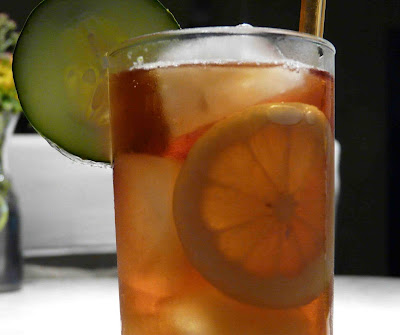 Last week, all the mixology gurus in our fine booze-loving nation were in New Orleans attending Tales of the Cocktail, a culinary and cocktail festival that involves drinking, presentations, drinking, history lessons, drinking, mixology classes, drinking, eating and drinking. For all of Felicia’s cocktail-blogging pals, it also involved writing.

Felicia’s blogging budget ($0.00) did not permit her to attend the festivities this year. She vicariously experienced the event through all the other mixology bloggers. Thanks to them, it almost felt like Felicia was there in New Orleans, especially since it’s been 95 degrees and muggy here in the Ithaca area. Felicia even ate some alligator meat on Friday at Trumansburg’s Grassroots Festival of Music and Dance.

A dozen or so myths exist as to exactly where the idea of the cocktail was born in the early 1800’s. One such story is about some dame in New York who garnished beverages with a feather from the tail of a cock. Get it? Cock. Tail. Another etymology is that the term cocktail is derived from coquetier, the French name for an egg-cup thing that was used around the same time to serve alcoholic beverages in New Orleans. This history and the large amount of imbibing that goes on there make New Orleans an important place in the cocktail world. For the record, in case you did not guess: Felicia’s worst subject in high school was history (Felicia prefers to says that she specializes in living in the moment).

You will not find most New Orleans-style drinks at Felicia’s unless it happens to be Mardi Gras, with the exception of this one: the Pimm’s Cup. Fellow bloggers at Married…with Dinner recently posted a fresh, classy recipe for this beverage that involves such antics as squeezing fresh lemons and using French soda. Luette, a former bartender at the Hustler Club on Bourbon Street, told Felicia yesterday that she makes a Pimm’s Cup with Pimm’s and ginger ale with a cuke garnish. She added, with great New Orleans bartender wisdom, “I think Pimm’s is kind of gross.” One of Felicia’s own bartenders, who likes Pimm’s, describes Pimm’s as tasting “sort of like flat coca-cola syrup mixed with bitter iced tea.” The back of the Pimm’s bottle reads more mysteriously, “a light, refreshing spirit carefully blended from fine liqueurs and fruit extracts.”

Try it, and form your own opinion.

Now who can Felicia speak to so in order to get a line item for blogging added to the lounge budget?? If you are lucky, maybe Felicia will see all of you in New Orleans next year.

Fill a double rocks glass with ice. Add Pimm's. Top with ginger ale. Garnish with cucumber slice. Toss in a slice of lemon if you are feeling frisky, as Felicia's drink photographer clearly was.
Posted by Who is Felicia? at 3:06 PM