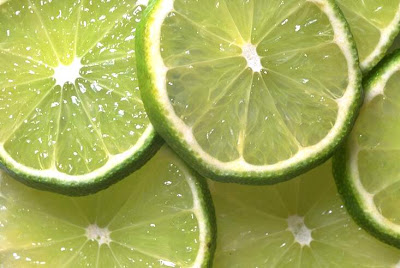 “And please bring Rose’s lime juice. The father of the groom likes gimlets.”

This request came in an email I got about a wedding the Lounge is catering this summer. My answer is NO. Absolutely not. We will NOT bring Rose’s lime juice.

Which would you prefer?

To empower you to have a choice (at least at home), I’m giving you our recipe. Stop drinking crap, please. I expend way too much energy feeling sorry for you and I would much prefer to celebrate your enjoyment of quality cocktails. And take note: if you are allergic to preservatives like me, ReaLime and ReaLemon 100% juice concentrates contain sodium benzoate in addition to a couple of -ites. Squeeze juice from fresh limes (we found a great juicer at an antique market and it looks hip on the kitchen counter), or check the frozen section of your natural grocery for a preservative-free alternative.

Heat water in the microwave or on the stove until almost boiling. Remove from heat. Add sugar and stir until dissolved. (You just made simple syrup.) Let cool. Mix with lime juice. Your sweetened lime juice will keep a couple of weeks in the fridge.

Same goes for making your own sour mix. Don’t use that nasty stuff that comes pre-made in bottles unless you want to glow in the dark. Substitute lemon juice for lime juice and you’ve got homemade sour mix. It’s that easy.

Again, NO, I will not bring Rose's lime juice to your special event. I've got something much, much better for that gimlet.

Thank you, thank you, thank you! Why would you trash a beautiful thing, made with love, with coloured chemical soup in a bottle? It's not even that much easier to buy Rose’s. I'm a huge fan of adding Sour to just about everything too, so I can't wait to try that recipe out. Although I rarely use it, would you be willing to share a substitute recipe for Rose’s Grenadine? Thanks again, Ryan-Conor

Homemade grenadine isn't very shelf stable, and we use grenadine in so few drinks at the Lounge that we don't mix up our own very often. Our friend and former bartender Nat, however, has done some experimenting out in San Fran and you can read some of the grenadine recipes she tried on her blog: http://www.alpha-cook.com/2008/11/mixology-monday-made-from-scratch.html

I cant thank you enough for your post. Not necessary the recipe, but the allergen causing your eyes to swell shut. That has happened to me on several occasions - I thought lime juice might be the culprit - but this posting has solidified my suspicions.

Thank to your receipe I can finally enjoy a good gimlet as I live in Romania, where they don't sell Rose's anyway! Plus your receipe spares me of ingesting nasty chemical stuffs!

Love the recipe, I use key limes and demerara sugar and toss in like a teaspoon of lime zest also (love live). Makes a brownish syrup, but a lot more depth of flavor.

Sorry, but it's not a gimlet if it's not made with Roses. I would suggest that our newfound cocktail of vodka or gin with fresh lime juice and simple syrup get itself its own name. It's not a gimlet by definition. A gimlet should be clear in appearance too.

Rose's in the US is made with HFCS, but in Canada, it is made with Sugar. I always buy mine up north. Last crossing back into NY State the Custom's inspector mentioned how many other people buy Rose's in Canada.

Thank you! I just made some and it's great. I never thought to read the label on the store bought stuff (very unlike me) but now I don't have to subject myself to hfcs.